Hughes Blog
Thoughts on Software Development, Project Management, Parenting, and Running.
Sunday, November 28, 2004
SugarLand Turkey Trot Race Report Thanksgiving is my traditional start of the fall racing season. The first race always gives me the hee-bee jee-bees 'cause it is unknown how I will perform. I had not done any trials this year, so I really was clueless. Referring back to the logs, I noted that I ran a poor 32:55 last year for five miles, but the year before I had run 30:24. Looking more closely at the logs, I saw that I had a cold for several days just before last years thanksgiving run. My training has been pretty good so far this year, and it even looks like I will go over 2000 miles for the year for the first time since I gave up running marathons! So putting all of that in the mix, I decided that I would shoot for 6:10 miles in this year's race.

My wife had been dragging me down to her families' Thanksgiving celebration in Navasota Texas for the last several years. Using Navasota as a base, I had run the Woodlands Five Miler for the last couple of years. This year my wife decided that we would not do the Navasota thing, instead we headed to her dads ranch in Cat Springs Texas. For many years before Navasota going to Cat Springs had been the Thanksgiving tradition and I had run the Turkey Trot in Sugarland which Dead Texan Doug Hyde(See Dead Runner Society in Links Section) had turned me on to many years ago. This year they made two very nice changes to the race: they added chip timing; and they went from 10 year age brackets to 5 year age brackets.

So, I checked out of work early on Wednesday, packed up the wife and kids and pointed the truck down I45. Thursday morning, I woke early and tip toed out of the house. It was very cold and I was surprised to find my windshield iced over. I thought it was just some frost but on closer inspection I discovered that it was a fairly thick layer of ICE - unheard of in those parts! I found a videocassette case in the truck which helped me get the ice removed. Finally I was on my way.

The drive to Sugarland was uneventful. I registered and went for a warmup jog. The weather was perfect; low forties, clear and calm. After warming up I did a bunch of strides, then changed into my flats and walked to the start. At the start I saw Doug and his team mates. We all shared our goals, then we were off.

This race has a gradual down hill first mile. Every single time I have run the race, I have gone out too fast in the mile. Today was no exception. I had gone out at a comfortable pace - however I noticed that I was the oldest person around - not a good sign. I was passed by a kid wearing track spikes. I knew I would soon get him back, and indeed I did. I hate to think about what his feet felt like after the race. I hit the first mile in 5:48. Finally a couple of masters passed me on the second mile. I came through that in 11:58, or 6:09 for that mile. I felt good and was optimistic about holding pace. Mile 3 came in 18:19 (6:21). No one was calling splits and I did not bother to look at my watch. I knew I was ahead of pace because it took a few seconds for my lap counter to beep after the mile mark. I felt good and push some more on mile 4 and came through right at 24:40 (6:22). The field was pretty spread out at this point, and I tried my best to keep pace for the last mile. I finished in 31:01 (6:19).

All in all, I was please with the result given nearly a two minute improvement on last year. As a nice bonus, I picked up third place in my age group thanks to the new five year divisions!

Next week is the week that I have always run The Arlington Winter Run, AKA the Penguin Run. This event has given away hand made ceramic penguins as the awards for overall and top three age group finishers. This year the event is canceled as the promoter has had some sort of accident. I have five penguins in my office and regret that I will not have the opportunity to add to the gaggle this year. As such it looks like the Rudolf Run in Allen Texas is on tap for my next run, a 5K this Saturday!. 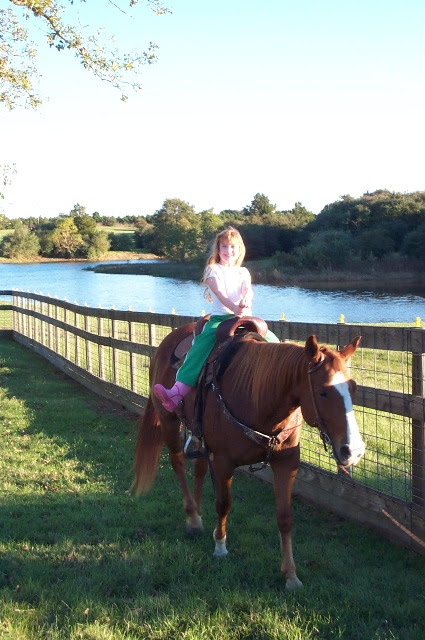 This is my Middle Daugher Logan on Fran's Cousin's horse Sassy! Taken at the OP Gates Farm in Cat Springs Texas. 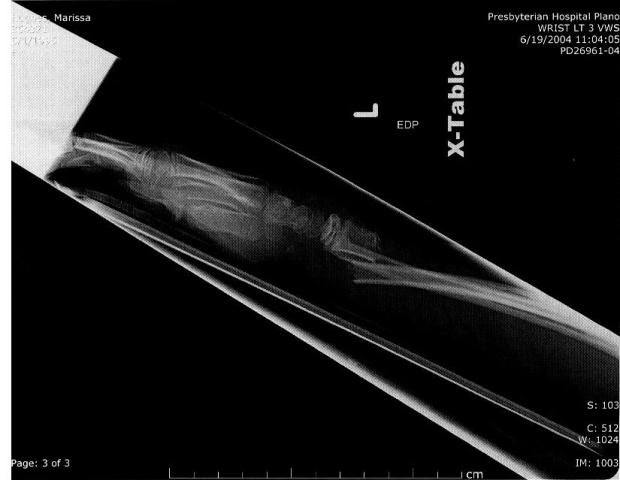 This summer my oldest Daugher Marissa, broke her arm playing on a glider at a park in Frisco Texas. This is the XRAY of her arm.

Hello World! Just trying to get this Blog up and Running!