Hughes Blog
Thoughts on Software Development, Project Management, Parenting, and Running.
Thursday, December 30, 2004
The Fish Marissa, my oldest daughter, the soccer player, wanted to share this with you. It is a photo of a huge lunker that she pulled out of her granddads stock pond. Marissa likes this photo. She wanted this one on the Blog because she hates the XRAY of her Arm and wishes that I would remove that one! 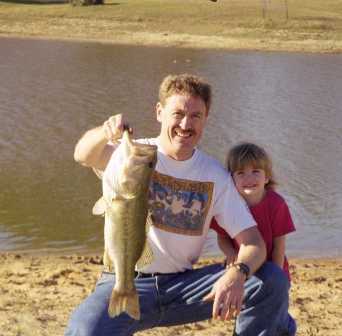 Sunday, December 26, 2004
Christmas The girls could not sleep Christmas eve. No surprise there. Of course that meant that Fran and I did not get to sleep either! By 7:30am the kids could not stand it any more. The kids were ready to open presents! An hour of chaos ensued which was great fun for all. Finally we were done with all of that. That allowed me to get ready for my final race of the season - The Plano Pacers 3K.

Have I mentioned what perfect racing weather we have been having in Texas this fall? Today was no exception. North Texas had been gripped in the coldest weather in years earlier this week. Saturday morning was no exception starting in the low twenties. However since this was Christmas morning, the Pacers had moved the start back to 10am. That turned out to be a stroke of brillance on their part. It was in the upper 30s by race time with a lot of sun and not much wind. Perfect!

The race started out pretty fast. The first kilometer has a nice challenging up hill section. The second K comes back down the hill. And the last K is nice and flat. I ran strong through the race and was able to turn on the juice for the finish. I finished this one six seconds faster than last year and broke eleven minutes posting a 10:57. That was good for first in my age group and second master overall.

Fran's mom just moved into a smaller townhome this year and as such Fran is now in charge of hosting the Family Christmas dinner and celebration. So I hustled back home from the race. When I pulled into the drive I was surprised to see Fran's mom's truck in the drive. I was more surprised when I opened the garage and the pickup was not in there.

When I got inside I was informed that Logan had knocked a christmas knick knack off of the top of the television set. This item hit her in the eye and Fran had to take Ms. Logan to the hospital for some stitches. Now there is a memorable Christmas present! 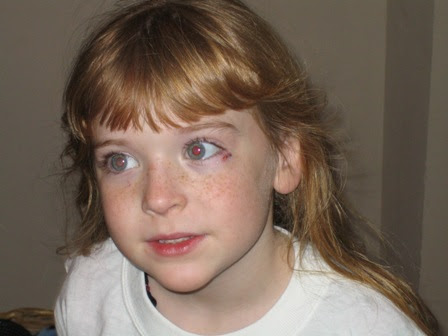 I hope that all of y'all have a great New Years!

Sunday, December 19, 2004
Jogr Egg Nogr Today was another spectacular day for running in Dallas, crisp and cold. The Jogr Egg Nogr features a 15K and a 5K. I like the shorter race and over the years I have run several 5K PRs on this course. The race features a nice downhill start, a turn around that brings you back halfway up the hill, then down another hill to the finish.

I felt really good today, unlike last week at the relay where I was suffering from a cold and had not run for days. Instead I went off from the start smoothly down the big hill on Mockingbird. I hit the mile in 5:39 and coasted to the turn around. I picked off a kid there, then the course goes over this pier that they installed recently. The course climbs back up to the Mockingbird bridge, and I hit the 2 mile in 6:11. I really should have hit that faster, but I was feeling in control. There was a a guy running in front of me and I kept focused on picking this dude off. The course loops under mockingbird on east Lawther and heads to the finish in Norbuck Park. I had closed the gap to the guy in front of me by half and at the 9 mile mark for the 15K I saw Coach Vaughan. The course comes under Buckner Blvd and it was at that corner that I finally passed that guy I had been working on. Good thing too because there is only 400 meters of race course at that point. I kicked it in from there and my split for the third mile was 6:02 and 18:28 for the 5K. My first two splits were the same as two weeks ago, but I had more juice left for the finish and picked up 10 seconds all on that last mile relative to the Rudolph Run. That was good enough for first in my age group and third overall master.

Next up is the Plano Pacers 3K scheduled for Christmas Day. Hopefully. :-)

Technical Difficulties I had been using webshots to host the photos on the blog. Those images decided to stop working - although I am not sure why. The links work if you past them in the browser. Anyway, I moved all the photos over to geocities - so we'll give that a shot.

Sunday, December 12, 2004
Dallas White Rock Marathon Relays For the past 7 years I have put together a five man relay team for the Dallas White Rock Marathon. This year was no exception. For the past five years we won the Odds and Ends Division. Two years ago our team beat Arturo Barrio's Team! That was cool. Anyway, this year I came down with a cold on Tuesday and was fighting that all week. Then my leadoff runner came up lame - pulled muscle - and we had to replace him with a guy who was also running the half marathon. So long story short we dropped a minute from our time last year and came in second place this year. [Late Breaking news - another team has been moved into our division which has pushed us to third place.]

My performance was clearly effected by the cold. I was 12 seconds per mile slower compared to my Thanksgiving Day Five Miler. That said my time was EXACTLY the same as I ran on the relay last year. That was good and bad - good in that I was not a drag on the team. Bad because well obviously I was running better this fall. Last year I was struggling with a cold and sinus infection - so it was not surprising that my times were similar.

Also - for those of you who have not yet heard - Arthur Lydiard died in his sleep last night. He will be sorely missed.

She Shoots and Scores! Marissa has been playing on competitive soccer clubs in Dallas for several years now. It has been frustrating for her because she has been behind in development compared to the other kids on her team. Last spring she became the leading scorer on her recreational team. So the problem was that she was in the no mans land between competitive and rec. She had progressed beyond Rec, but was struggling with competitive. This was compounded, literally, when she broke her arm this summer. This fall, she usually only played 5 minutes per game. That made it hard to tell if she was progressing. Well we think that might have changed last night.

This was the first game of the winter indoor season. Coach Ade made Marissa play the whole game - a first for Marissa! About 15 minutes into the first half Marissa's team, the Longhorns, had a nice attack going. Marissa was on the far side of the play, behind the goalie. One of Marissa's teammates passed the ball past the goalie and Marissa put the ball in the net! For the first time in her competitive soccer career, Marissa told us that she had fun in the game.

We are really looking forward to a few more games like that!

Yesterday I ran the Rudolph Run in Allen Texas. In short, this is a really nice run. The morning was beautiful - nice and cold - no wind. The course is a nice relatively flat loop. The event had great awards for the top three finishers: handmade statues, cowboys tickets, a pair of shoes. I won second in my age group and got a coupon for a free haircut in addition to a trophy.

Next week is the Dallas White Rock Marathon. For the last six years, I have put together a five man relay team. Yesterday's race was a good tuneup for my team. Brooke won the womens race by a minute and a half; James Whitlatch won his age group; and John McGehee also placed in his age groups as well. So we are looking good for next week!