Hughes Blog
Thoughts on Software Development, Project Management, Parenting, and Running.
Thursday, December 28, 2006
Another Batch of Beer The beer bottles are starting to accumulate in the pantries. That is a sure indication that its time to fire up the brew kettle. On Tuesday I picked some Malt Extract, Grain, Hops and Yeast. Today's Recipe:

Update Jan7 - Racked to Secondary Fermentation and added a half ounce of Saaz to Dry Hop.

Wednesday, December 27, 2006
Fighting the wind During our long frozen ride last Saturday, Terry proposed that we drive up to Oklahoma on Wednesday and ride around some park up there. But the guy who knows the route was not available. So last night Terry suggested that we ride down to White Rock Lake, then out past Forney, and come back on the 205 through Rockwall, then home. Stupidly I agreed to this madness. Terry said it was around 60 miles. Turns out its probably closer to 80 miles. But thankfully turned out that we would not do the whole ride.

We had a nice strong (up to 20 MPH) south wind blowing when I hooked up with Terry at 7:30. We hammered it straight into the wind for 25 miles down to White Rock Lake. At the lake we hooked up with Dave DeSosa. Dave showed us how to get from the lake down to I30. We hopped on the access road and followed that to US80. A couple of miles before we got to Forney, the access road ran out. We could either get on the highway or turn around. Since none of us had been out that way before we decided NOT to follow the original plan. So we turned back around and then FINALLY (after 45 miles) we turned North.

We followed East Fork which turned into Bobtown Road to Rowlett Road. From there we took the usual route home through Sachse. When I pulled into the homestead I had 65.4 miles. Terry reported 67 miles.

I was really happy to get the miles in, but the wind was insane!

Monday, December 25, 2006
Santa took pity on my frozen toes Santa must have gotten wind of some of my frozen rides.

I got a pair of these really cool CalienToes from Pearl Izumi.

For those colder days, how about these booties from Bergamo?

And how about this jacket from New Balance?

Sunday, December 24, 2006
Long Frozen Ride Yesterday Terry, Jane and I set out for a two hour ride. It was really cold, mid thirties when we started. Jane took us on a new route through Murphy, Parker, Lucas, Fairview, Allen and Plano. It was really a nice ride though the country. I'll be sure to use that route again in the future.

I had logged about 33 miles when Terry and Jane peeled off for home. It was around 9:30 which meant that the riders from RBM should have been in the area. I guessed that they might have got a late start and that they would be behind me as I rode towards home. Sure enough just a block before home, I saw them closing in on me. Since I could not feel my feet, I figured I might as well pick up a few more miles.

Two weeks ago it was cold enough that they had combined the top two groups. When they caught me I surmised that this was the fast group. But I would not be sure until we got to the point where the routes diverged in Sachse.

Sure enough it was the fast group. I actually survived the first several hills. Usually I get dropped on the first hill. I was hanging in there pretty well. Until I realized that the guy I was drafting on was dropped from the front group. By the time he moved aside, it was too late.

So I hammered solo for about 10 miles with my HR above 180 (90% Max). There was a group of three behind me. I was able to keep up with the main group but not close any ground. I dropped the group behind.

Finally I was spent. I had less than ten miles to home. Eventually the group of three caught me. I was so hammered that I could not even keep up with them. I took the shortcut around the light at 78 and that got me in front of the group of three. They passed me a second time on Murphy Road less than a mile from home.

With discretion the better part of valor, I peeled off with 55 miles in 3.5 hours. It took about 20 minutes with the hair dryer pointed at my toes before I could actually feel my feet! 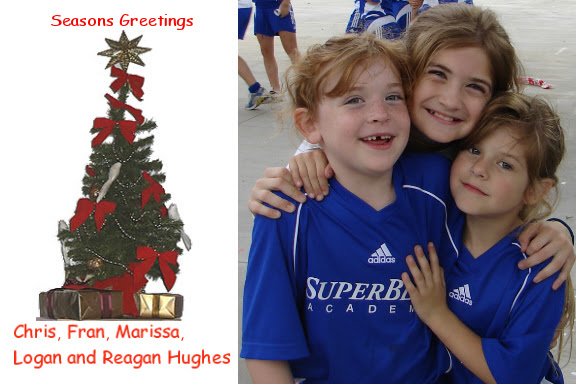 Saturday, December 16, 2006
The Parent Trap As we have already explored, Reagan is Howard Stern's Twin. Over Thanksgiving, Fran's Cousin Tommy told me that Logan looked EXACTLY like Lindsey LowHands, particularly when she was younger like when she played the twins in The Parent Trap. Well I had not seen that movie so it was hard to comment.

Logan and Reagan were watching the movie and sure enough there is Lindsey LowHands and she DOES look like Logan. 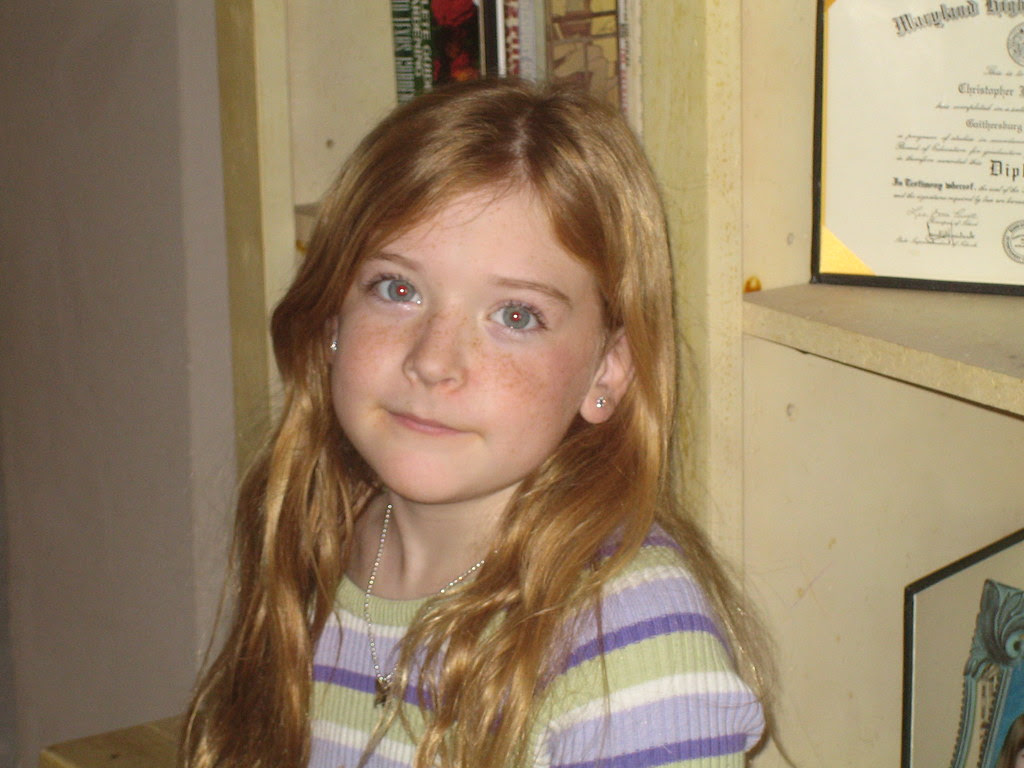 You can't please all the people all of the time. Last summer I wrote about a product called Freeway from LionBridge. I had forgotten all about that, until I tried to link through the LionBridge Sales Yahoo on Linked In. He refused to pass my request on to the contact that I was trying to get in touch with. Apparently he did not like what I had to say about my experience with him and my assessment of the service. He suggested that my words were "Uncouth" and "Disrespectful."

Certainly I am not a master of the Queens English, but at the same time, re-reading my post, I felt like I offered a fair assessment of the service and of his approach.

As a point of clarification, Freeway doesn’t lock you into 1 supplier, just like banking with one bank doesn’t lock you into just using that 1 financial institution. Freeway is akin to banking online in that it provides our clients with a [free] facilitator of our services, supported by unparalleled functionality in translation memory management, CMS connectivity, and front-end dashboard management/reporting.

What advantage is a centralized content management system, if I can only use it with one supplier? I can use Freeway with Lionbridge and I can get my Freeway data and then manually sync that with other suppliers. Got it. I am not "locked in". But, how did that add value to my efforts? It did not. I only get business value if I limit my service providers to Lionbridge. Right?

My friend told me that Freeway was like Salesforce.Com. Its not, of course, but lets try to use the anology. If I chose to work some of my projects with Lionbridge and some of my projects with SDL, that would be like having half of my sales yahoos using Salesforce while the other half were using ACT. So the lead management team would need to get the data from both applications and work with the IT Department to create an application to synchronize that data. Now that's adding value!

So. Freeway is a lock in play. I applaud Lionbridge in its innovation. But it is what it is!

If Lionbridge want to capture our attention, then make the service available to anyone for free. Suppliers and Translators. For free. Make the service a market place where Lionbridge can compete against anyone. In that event I might be willing to use Freeway. The advantage to Lionbridge is that they have the ultimate edge in competing for services against any suppliers since they are hosting the marketplace.

And if you were wondering about my friend on Linked In, there is no need. Since he refused to forward my message, I had no choice but to nuke him as a connection. So Sorry!

Slider's New Home Way back when in annuals of the Hughes Family, in fact it must have been about three years ago now that I think about it, we found a Turtle hiding in a soccer goal over at Breckinridge park. Logan was warming up for her game with her Kindergarten Team, "Velocity". Marissa thusly adopted the Turtle and named him Slider. Slider had been living for these past three years in a ten gallon Aquarium in Marissa's room. This is a picture taken last year of Slider in his aquarium: 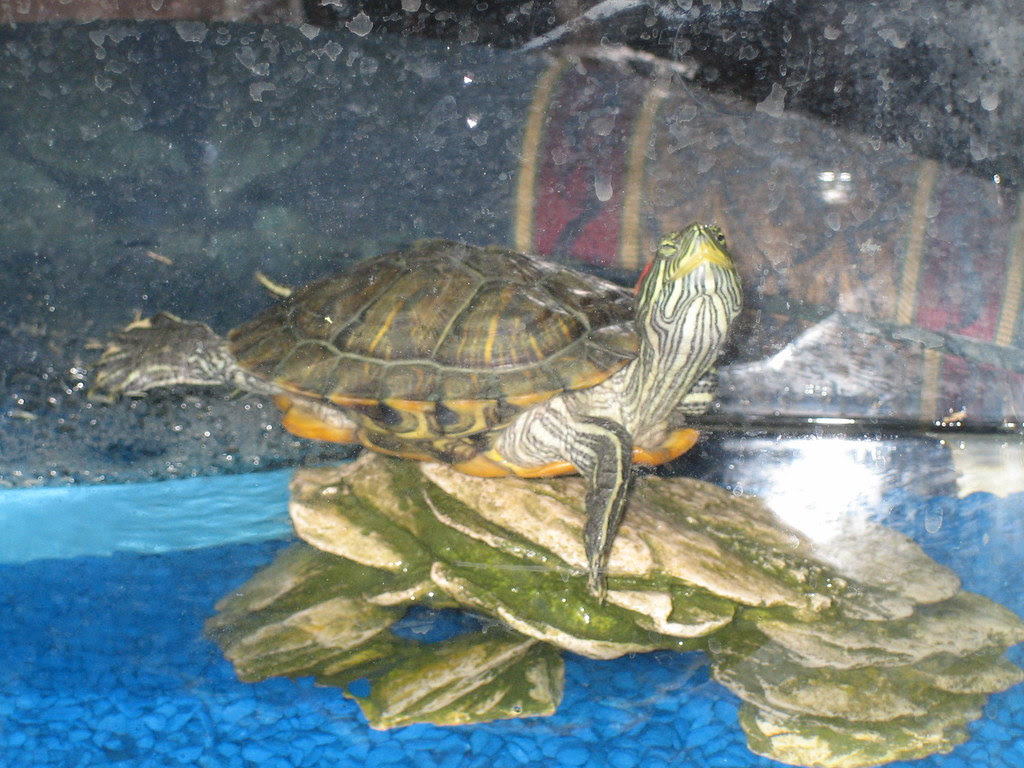 Even a year ago he was too damn big for that aquarium. I tried in vain to get Marissa to take slider back to the pond in the park next to the field where we found him. But that plan was going no where. So I decided to build a Slider pond on the side of the house: 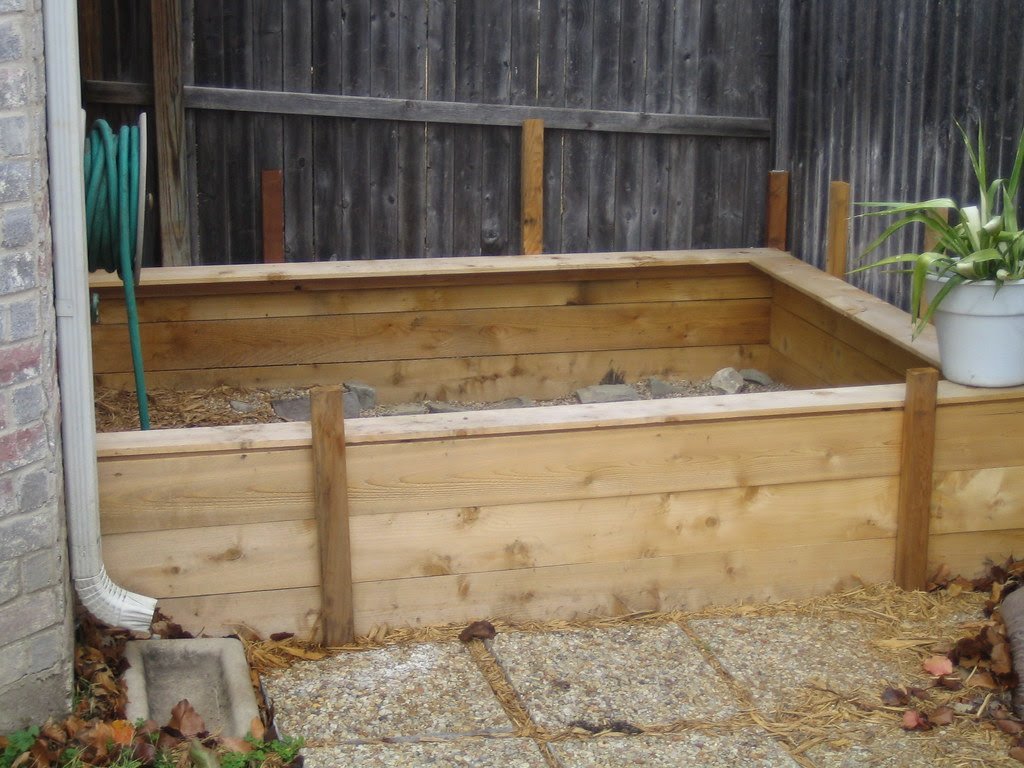 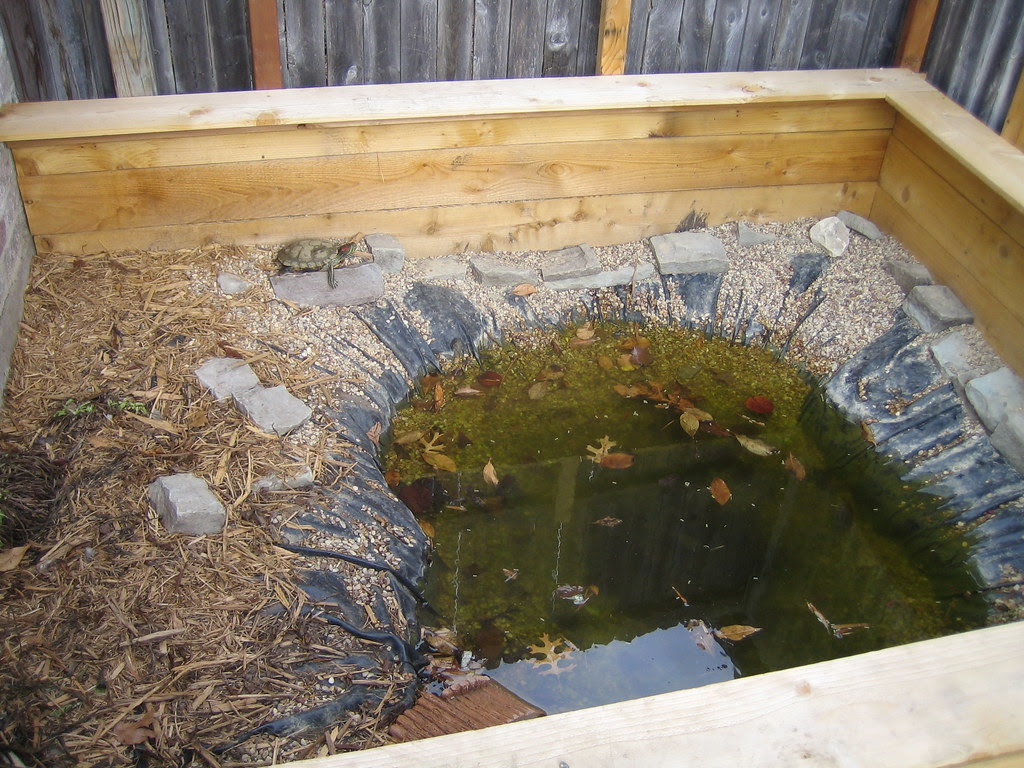 Marissa promptly went down to the pet store and got a slider a girlfriend who she named Sammy. I don't have a picture of Sammy because she buried herself for the winter. 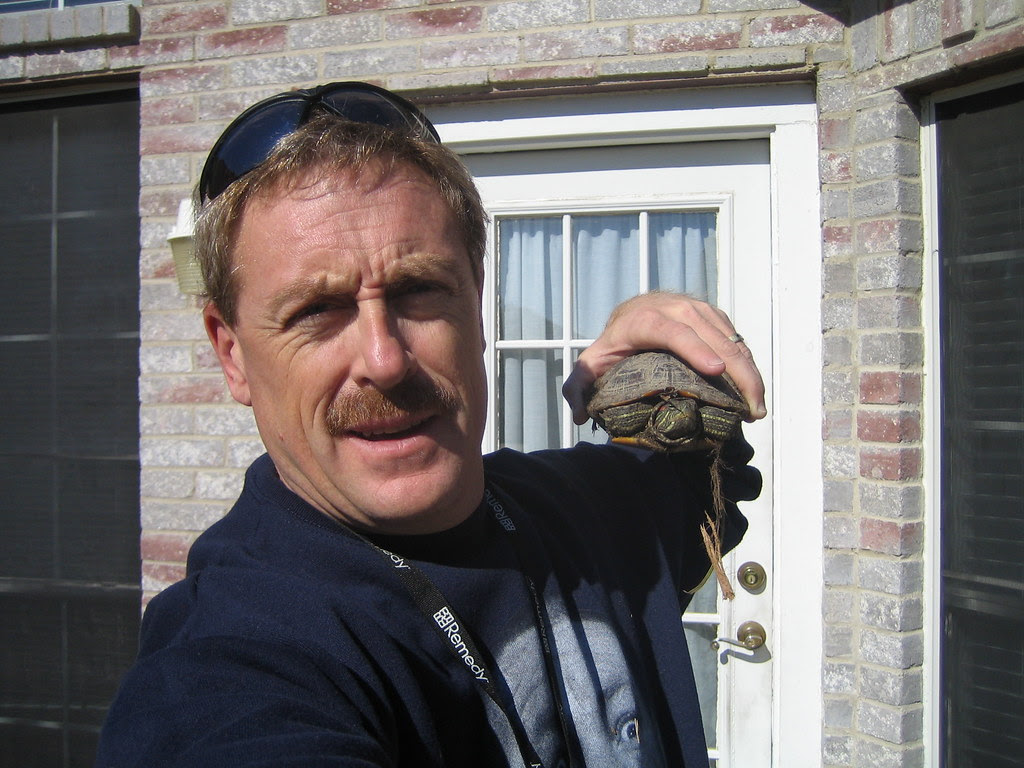 Fall in North Texas I snapped these photos two weeks ago, just after hanging the Christmas lights. The trees were in full fall color. 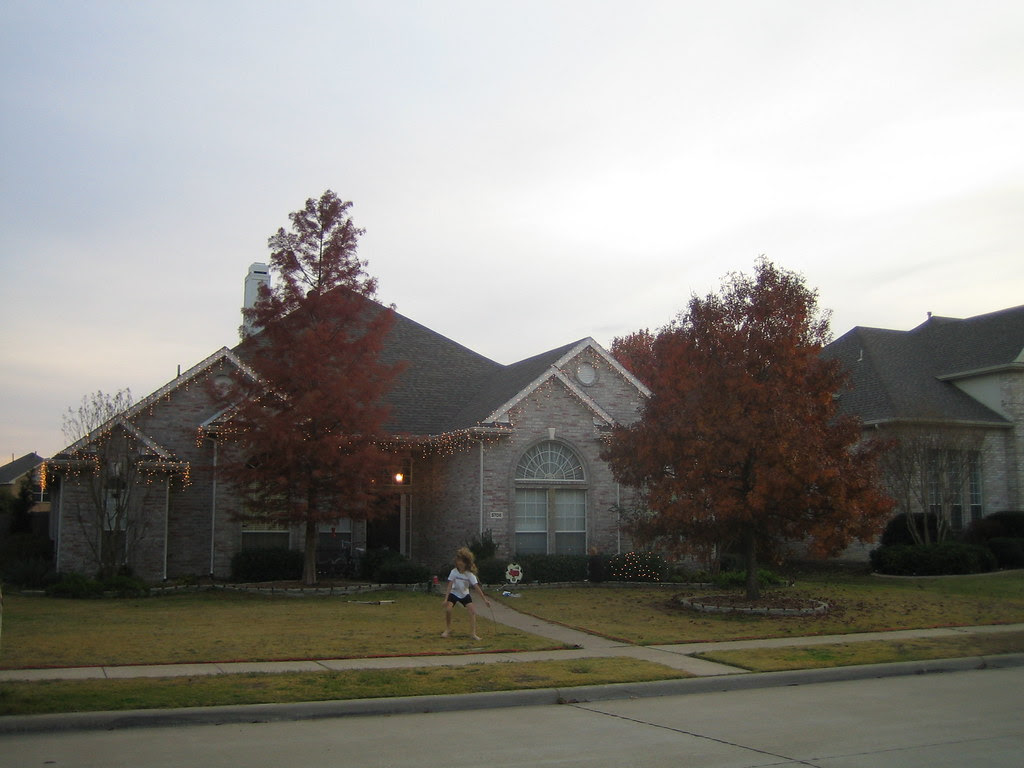 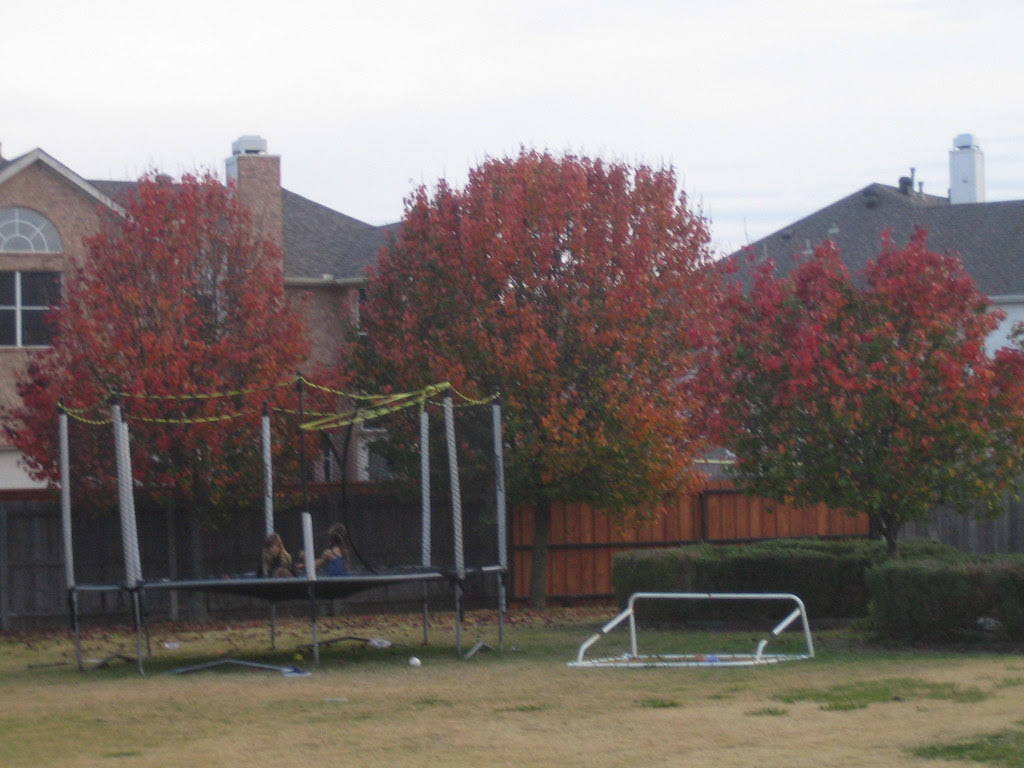 Today my team completed Certified Scrum Master Training. We took the course from Brent Barton of Solutions IQ. The materials, content and pace were excellent. I'd recommend this to anyone interested or even practicing Scrum.

Saturday, December 09, 2006
Texans Win at the Blue Cup! Marissa's Team has been playing OUTSTANDING soccer recently. They finished their fall season is great form winning 3 out of the last four games. Last weekend they opened their Indoor Season with a 5-0 win (and Marissa got a goal too!) This weekend they played in a local tournament.

Their first game was against that team that they lost to in that fourth game mentioned above. Revenge worked wonders and they pulled off a 1-0 win. Then they played against a Division 2 team. (Basically the top 30 teams in Dallas are broken into three Divisions - D2 represents the teams ranked 11-20. Marissa's team is not in the top 30.) But for the first time is six attempts they finally pulled off a win beating this D2 team. They lost tonight against another D2 team. But they finished tied for fourth out of 12 teams in the Tournament.

Better yet they are really playing well. Its a thing a of beauty!

The Blog Turns Two I totally missed it. The Blog turned two on November 27.

November Workouts October Started with the promise of being able to ratchet up my running, and ended with the realization that my knee situation required no running. So for November it was back to the pool, and laying off on the running while the knee heals some more. I picked up some bad allergies that turned into some nasty congestion over Thanksgiving. So the end of the month was pretty slow.

Status on the hip Cheryl asked about how my acupuncture was going. I have continued to see Dr. Bunzo once a week. The treatments have really helped to keep the inflammation under control without having to resort to Celebrix. So my liver, in particular, has been overjoyed. And the hip is in pretty good shape!

Generally the treatment includes a 45 minute nap and generally I am taking this treatment in the middle of the day. There is nothing better than getting a nap in during the work day! So the bottom line is that the acupuncture is working well for me. I'm digging it!

Sadly my knee is still acting up when I run. As a result I have not been running. But I have been swimming like a freaking fish (4500 meters this week) and riding the bike (26 miles today at 32 freaking degrees.)