Hughes Blog
Thoughts on Software Development, Project Management, Parenting, and Running.
Sunday, September 20, 2009
Workout Notes 2009 Week 38 Sunday night I flew down to Houston for some mandatory training at headquarters. After Sunday's race, and the travel I was completely bushed. Monday morning the best I had in me was 30 min easy. Tuesday morning I managed to do my plyometrics. Wednesday I flew back to Dallas and then headed to the old pool to knock out my swim. Both Tuesday and Friday, I went for a longer number of reps - which felt pretty good. I will probably have to do more of that sort of thing. Thursday I decided that after 9 weeks it was time to do the transition to some speed work. I knocked out a 20 minute fartlek. Thursday night I started feeling like a cold was coming on. I took some cold medicine before bed and I felt crappy on Friday, but I still managed a strong swim. Friday night I had a couple of Mararita's at OTB which seemed to kick the pants of the cold virus. Saturday morning I got up and rode the bike over to RBM and then hooked in with th 8:05 ride. Super Dave was in the pack as well; we had a good chat. We did the first loop and then waited for the 9:05 ride and did it again. Very nice. And Fast. Sunday I got up at ODark Thirty and rode out to UTD and back, picked up Vic at her garage, Rode out to UTD again, where we met Marius and then we went up to McCreary and Parker in Parker Texas. Almost 50 for Sunday. Good bike for the weekend.

Saturday, September 19, 2009
Workout Notes 2009 Week 37 Sunday night we spent the night in Marble Falls Texas. Monday morning I got up early and jogged up the high school to do my Plyometrics. Tuesday it was back tot he routine; a nice swim at lunch. Wednesday I hit my run pretty hard it was 90+ degrees outside, and I managed to run 8 miles in 61. Tough! And I paid for that run on Thursday, I was dragging for my plyometrics. Friday was more distance on the swim, a nice change. During my swim I got the brilliant idea that I should do the Prairieman Sprint Triathlon on Sunday. So on my way home from work on Friday I stopped by RBM and registered. Saturday is was raining but I thought I would do an hour on the bike anyway and try some pace. I figured my legs were pretty shot from all the running I had been putting in. And of course the race on Sunday, where it was raining like a mutha but somehow I managed to finish third overall.

Thursday, September 17, 2009
Prairieman Sprint Triathlon I had been planning to run the Stonebridge Ranch Triathlon on Sept 27. However, it was becoming very clear to me that travel was likely to interfere with that plan. While I was doing my swim on Friday, it occurred to me that the Prairie Man Half Iron and Sprint were this weekend. Of course it was going to rain too. Well it was raining. For a fleeting minute I toyed with the idea of doing the half iron. But that was too much time out of my Sunday. So when I got back to the office I called Fran for approval to do the Sprint, which was granted. After work I stopped by RBM on my way home and registered. They must have thought I was out of my mind given the impending weather: rain out the wazoo.

Sunday morning I got up at ODarkThirty. It was raining like crazy. I needed to leave by 0500, but I missed that cutoff by a few minutes. Then I realized that the truck had no gas. Jeez. I hit the gas station and the pump did not work. Moved to the other pump. That one did not work. Double Jeez. Drove to the other gas station and loaded up. Iron Jack the race promoter is a notorious hard ass. Be there by 0615 or don't race. It was pouring down rain - did I mention that - so I could not drive too fast. Then I took the wrong exit on the highway. Triple Jeez. Finally I got to the park at 0610. Wow, close call.

I got all the gear together and got on the bike and rode the mile or so from the car park to the transition and set up my transition. Pretty soon people were beginning to gather for the obligatory race meeting. I had not done any material warm up - not great. I dumped the rest of my clothes in the bag I had at transition and stood shivering in the rain for an eternity before Jack finally turned up. After an even longer eternity Jack finally decided to let us get in the water!!

The first wave in the water was my group - everyone over 35 doing the sprint. The water in Joe Pool Lake was 82 degrees, lots warmer than the air and the rain. It felt great. I lined up as far to the inside of the start as I could get. There were a few folks lined up in front of me. When the gun went off I found myself in the middle of a pack of maniacs. Right away some idiot swam right over me. Sheesh. In retrospect, I probably should have made a beeline to the far inside and swam around the pack. Instead I used a couple of pointy elbows to keep the masses at bay. As we got close to the first turn, I started taking on water with each attempted breath. All of a sudden I started to panic. After a few more useless strokes I switch to breast stroke in an attempt to prevent drowning. I did about 10 meters of breast around the first turn and then calmed myself down and concentrated on long smooth strokes. From there I was fine, I was quickly out of the pack. I made the turn around the second buoy with no problem and headed home. There was one guy nearby and I did my best to put the hammer on him. Unbeknown to me, at the time, I was the third one out of the water.

Third out of the water...Only one other swimmer in sight?

Did I mention that it was pouring down rain? In spite of that I got my shoes, sox, glasses, number belt and helmet on. Then I grabbed the bike and sprinted for the exit.

I could not see anyone in front of me. There were some twists and turns necessary to get out of the park and I was not entirely sure I was heading the right way. Finally I got out on the main road and not too long after that I spotted two bikes up ahead. It took another few minutes before I got to them and made the pass. The first part of the race was out and back on this main stretch of road. When I got to the turn around I knew that I had been leading the race because no else had come back down the road. That did not last long as I was passed in very short order. The second part of the ride went back to where we turned coming from the park and then several miles beyond that point before turning around a second time and heading back to the start. I was passed two more times before the second turnaround. At the turnaround one of the guys who had passed me was stopped. Apparently he had flatted out. That moved me back to third. I held that position until just as we turned back into the park when another guy passed me. I followed him back to transition, where I jumped off my bike and blew by him in the transition.

Third off the bike.

The two yahoo's in front of me had a pretty big lead. In fact they were out of sight. Generally bikers are not great runnner's. I was looking for signs that I could run at least one of these dudes down. There was a big gap between first and second as well. I would occasionally catch a glimpse of number 2 and I pushed really hard to close the gap. There was a turn around point at about mile two, which gave me confidence, but it was a false hope. Basically the three of us ran solo. The second place guy and I ran nearly the same time while the winner put more time against the two of us.

Third after the run.

Now the question became, how fast would the youngsters from the second wave be? And the answer was that they were not fast enough to beat out the three of us geezers from the first wave! I was third overall and first master.

Cooldown run. Much better with a shirt, a hat, a drink and the training shoes (Brooks Launch) 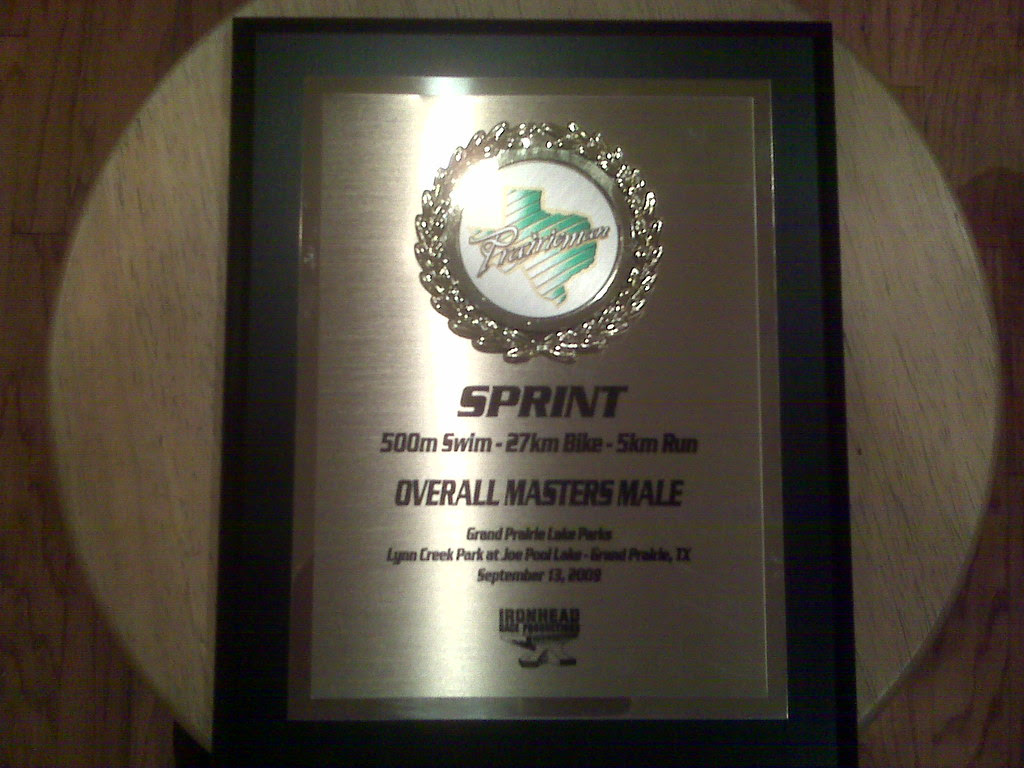 Monday, I did my plyometrics; the workout felt great. But by the evening my legs were sore presumably from the workouts combined with the nearly 150 miles on the bike over the weekend. I was dragging for Tuesdays Swim. I was supposed to the 200 repeats in 3:30 and the 100s on 1:45. Nope.

Wednesday the drag continued. I was a few minutes slower on the eight mile loop. Circuits on Thursday were better however.

Friday I stayed home from work so I swam early at the Garland club. After school we packed the kids up and drove to Austin for Marissa's labor day tournament. Marissa had games at 0900 up in Round Rock so that meant I needed to be out the door at 0500 if I wanted to run. Saturday I headed south to the UT campus and then on to the State Capitol. Sunday I just did a loop of UT.

Friday, September 04, 2009
August Workouts While July was a month in transition, August turned out to be fairly chaotic! I started the month somewhat strong racing the Two White Dogs Duathalon. And I was feeling very strong and getting pumped up to do some Sprint Triathlons. But then I crashed the bike which was a small setback. And then I sprained my ankle, which was a much bigger set back. Nevertheless I sucked it up and instead of a sprint triathlon I closed the month with the Hotter N Hell 100 mile bike ride, which was amazingly fun.