The first time I did Stonebridge I had never done an Open Water Swim - race or practice! This would be my first Olympic Distance race.

After incencent nagging from all of my training partners, I decided that this would be my first olympic distance event. At the sign up they gave me the wrong swim cap. And I had to check with Staci to make sure that I was properly registered. They also gave me a shirt with blue panels. Post race I noticed that all of my Olympic competitors had shirts with yellow bars not blue.

When I got up Sunday morning it was still raining, as it had done all day Saturday. After getting my transition set up I headed up to the swim start in hopes of getting in a warmup swim. They told me to wait until the kayaks were in the water, which I did. By that time the race was already late. No warmup. Unreal.

There were four swim waves and I was in the last wave. First off were the open racers (there were four total), next were all of the ladies, then men under 40 and last the old guys. I had a smooth start and was siting well. Only once did I actual run into a person who had stopped in the water. The swim was two loops and I thought that there were only three bouys (a triangle). Had I paid better attention at the start I would have noticed that there were four markers. After the third bouy I turned toward the first marker. But then I noticed that EVERYONE else was swimming to my left. Thats when I noticed I was off course! Sheesh! 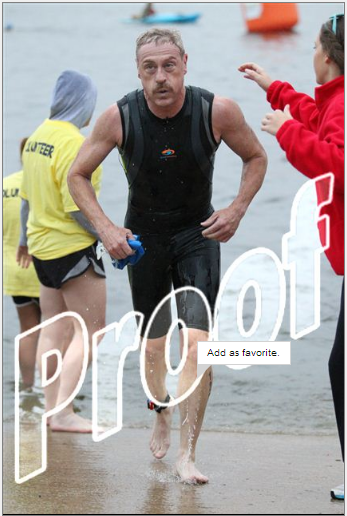 Out of the water

By the time I was done with the swim I had passed most of the three waves in front of me including one of the four open guys. As I was climbing out of the water, another master from my wave told me "good swim" then he said, "are you 51?" "Yes," I replied and he said, "good - I am glad you arent in my age group!"

After nearly killing myself on the "hill of death," the run to transition, I managed to get my skin off quickly and got the heck out of there. 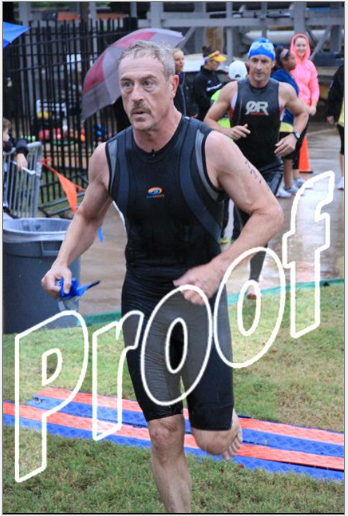 Heading for the hill of death

It was raining for all four of the bike loops. No one passed me on the first loop and I passed a few people. The second loop featured all of the people that I passed in the pond. Uggh. MOVE RIGHT PEOPLE!! No one passed me on the second loop. Third loop a guy with 42 on his leg came by. Masters! Shit. I passed him back. Then he passed me back and gapped me. I kept this guy in my sights for the whole fourth loop but I could not catch him. Coming back into transition my stomach cramped as I was loosening my shoes. Then the guy at the bike line almost knocked me over when I came to a stop. At that point I got a cramp in one of my legs or feet.

I had brought a water bottle with me on the bike. For sprints there is no point. I forgot to drink on the first loop but managed to get some fluids down on the other three loops.

In transiton I got my shoes on quickly and was out of there. There was another masters guy right on my butt, but I managed to crush him on the hill out of transition. Meanwhile 42 guy was nowhere in site. I saw no one in front of me until about 2.5 miles, when Austin Saylor came flying by in the other direction. I started counting heads. Three more guys went by before 42 guy came by, This was right at the three mile mark. So basically he had a quarter mile on my at that point. I had carried that water bottle with me off the bike and was still hydrating well and I had no cramps. After I made the turn there was a whole pack of guys not too far behind me! Yikes. Time to get serious. I dropped the bottle and kicked it into high gear. I pushed pretty hard through all the hills. When I got to the bottom of the last tunnel, I looked back and there was still one guy (at least) still not too far. But it was up a small hill and then down a long hill for a quarter of a mile to the finish. There was no way that this guy was going to get me. And thats how it ended. 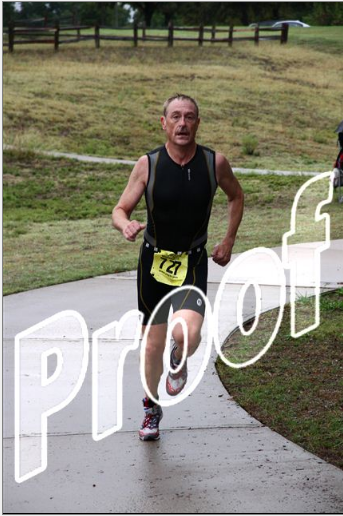 The second guy in my age group asked me if I was doing longhorn. When I told him I was not, he said, "good". Heck maybe I should do it!

The awards were a nice beer glass - and in spite of not getting an "overall" glass, the "first place" glass will get a bunch of use!

I have to say that it felt pretty good!