Training had been going very well and this weekend was wide open with zero soccer games or other activities. I had some heavy travel coming up in May after this event - so it seemed like it was perfect timing to do a long Triathlon. The only problem was that it was a lake swim in early May with very cold water and I had no wetsuit. Pedro and Ron both came through however, and I ended up with three wetsuits to choose from. BUT what a pain in the ass getting in and out of those suckers and as of Race morning I had never swum in one! 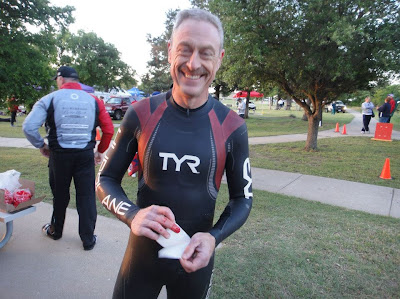 Butchered my finger before the start of the race!

Race morning I had a long but uneventful drive to the venue. I got all my gear set up in transition. It was cold, right at 50 degrees. A bit on the cold side but not bad. I headed to the bathroom before putting on the wetsuit. The park bathrooms had a small line and in there I found Pedro who directed back to the portajohns. This turned out to be a bad idea as I slammed my finger in the door and cut the crap outta it!

After that I managed to get the wetsuit on although there was blood all over it, and then I headed down to the start. Me, Ron, Batata and Braden got in the water to "warm up". The water was pretty cold; I guess we did something like 200M before they called us in. Ron, Batata and Braden went off in the first wave. I got behind Jim Brown, in my wave but he was "on to me" and told me to go next to him. The sun was coming up right over the first buoy and as a result I could not see anything out there. When the gun went off I ran as fast as I could into the water and was way out in front of everyone else by the time I dove in and started swimming. I went out really hard and still could not see ANYTHING. I kept swimming and sighting. Nothing. I was pretty sure I was way off course. I saw Jim 20 feet to my right. But I could not make myself breath to the right to keep an eye on him. Finally I hit a sandbar and I stopped and stood up to get some bearings. I found the first marker and a pack of slower swimmers from the first wave. I headed toward them and then finally found the buoy. There were a bunch of guys fiddlefarting around the buoy so I went right over them and around the marker hard. From there I was motoring. The final stretch in was pretty shallow. There were a ton of guys running in the water; and I was still swimming faster than them. I got out of the water and got my cap and googles off. I tried to get the wetsuit off but only managed to get a shoulder out of it by the time I got to the strippers. Then those guys (three marines) ripped that sucker off of me and I was on my way.

Fourth Overall in the swim

I could not feel anything below my ankles. On my way to transition I passed my man Archie and also Roberto. I had a pretty good transition but could not get my feet into the shoes once I got on my bike. Funny. I never felt cold on the bike. Archie passed me late in first loop. At the park turnaround I got confused and turned too early, and lost a 30 seconds or so going back to to get it right. I was working with a kid from Loncar, and we traded leads several times on the bike. My first and second loops were very consistent.

Staying Aero on the bike

I hopped off the bike and I could not feel anything below my ankles! In transition, I could not get my socks or shoes on standing up. Had to sit down, take a deep breath, then I was good. Out of transition the first guy I went by told me to slow down! WTH? I settled into a good clip and the Garmin reported I was doing sub 7 miles. After two miles I caught Jim for the Grand Master win. I hit him hard and he later told me that there was no way he could go that pace with me. Archie was still in front with Todd Hamilton (who was working with Ben Drezek). I was still working with the kid from Loncan as well. I did not know how many Masters were in front of me - but I ran down a bunch of them! I never did catch Archie, but my cushion from the swim was enough to finish ahead of him in the standings!

Batata won overall; Ron was runner up; Braden was 4th and Pedro won the sprint. Good haul for da crew!

Running down the masters

Seventh Overall, Second over 40; First over 50 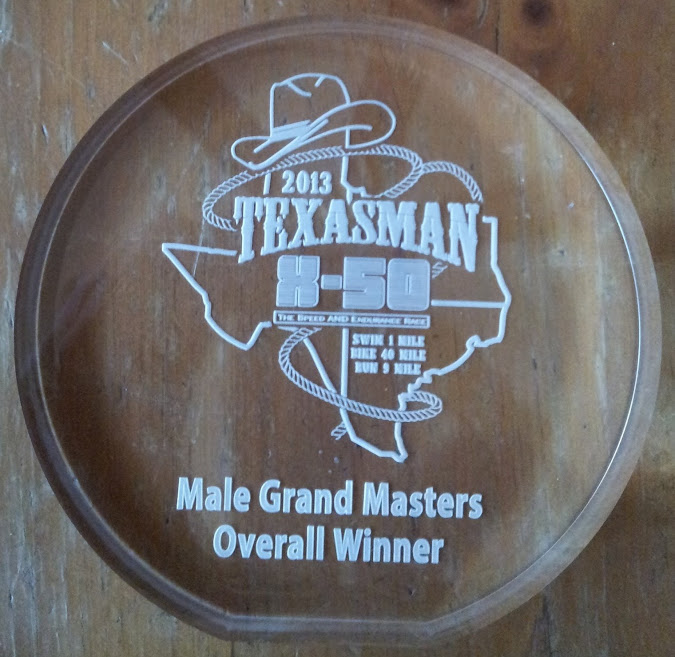