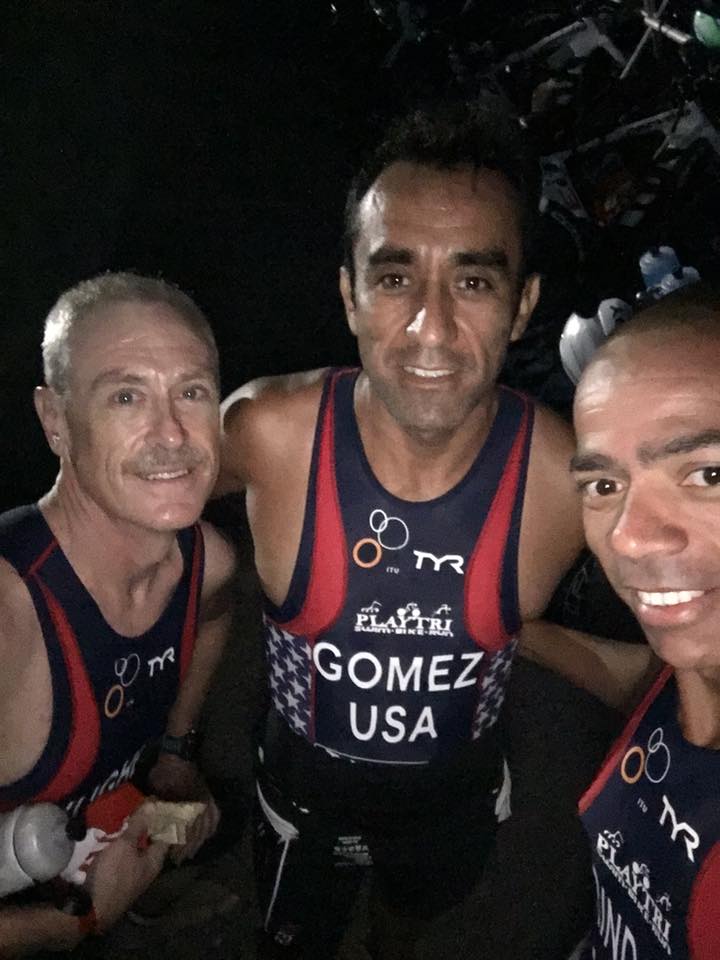 With Pedro and Fred

The idea for this race started in mid 2015 as I was recuporating from knee surgery. The Redman Triathlon was the USAT Long Course National Championship Race and the sole qualifier for the ITU World Championships to be held at the Redman site in 2016. I managed to finish in the top 10 in 2015 and qualified for the Race.

My Goal for the Race was to Run the run. I had to walk quite a bit of the run at Redman 2015 and also at Ironman Texas in 2014. I spent a great deal of time training for the endurance run over the summer and I felt very prepared.

Several equiptment themes were at play as well. I had decided to wear a new pair of Ghost 8s for this race. I had wore lighter shoes in the previous two races. And at Redman last year had bad blisters in my T7s. For nearly the last six months I had been trying on new Cycling shoes. I returned two pairs of Gareanu shoes and one pair of Shimano's. I bought a pair of Sidi T4s the week of the race. The day before the race I rode 9 miles around lake hafner in those shoes and decided I would wear them! We were required to wear the USA team kit, which had short sleeves and a zipper in the back. Sunscreen was going to be a requirement if it was sunny.

The week leading up the race, was disasterous weather wise. Highs in the 90s and the lake temps actually getting warmer every day. Redman had never NOT had a wetsuit swim for their event, but headinng into the race it looked like it was going to hot and not wet suit legal.

I had an nice uneventful race morning. It was a short drive to Lake Hafner from my hotel. It was a mile hike to the transition from the parking lot. I had a few snacks along the way. I brough three 24 oz bottles with me. Two each had one scoop of Heed and the other had five scoops or Perpetum. I put these on the bike. I had another bottle that I was drinking from to stay hydrated for the swim. The dreaded annoucement came that there would be no wet suit for the swim. In addition to my usual stuff in transition I put a large spray can of sunscreen under my bike.

All three legs of the race were north-south loops. Two loops on the swim, two on the bike, and three on the run. The wind was blowing hard, a steady 20MPH blast from the south. There were whitecaps in the lake and it looked like it was going to be a challenging swim.

I was in the fourth group to start, after the Male and Female Pros and the Men under 45. The course was a long rectangle - 975 Meters our 25 meters across. There were four yellow buoys, two each on the ends of the rectangle and a series of orange buoys marking the length of the swim. The lake was a little low and we had to wade out quite a ways before it was deep enough to swim. I tried to get a few strokes to warm up but the gun went off right away! Wow! I started wide right, mostly because there was not enough time before he start to get close the buoy! No worries. After a couple hundred yards there was a really shallow spot and everyone was walking as the water was probably 18-24 inches deep. Then back to swimming. As we got closer to the yellow marker the water became deeper and rougher. Once we turned on the first buoy the waves would be crashing on top of us and then it was swimming into the waves all the way back to the first markers. I had no real problems with the waves - it is a matter of timing your strokes and breaths and sighting to work with the waves. Wait until you are at the top then breath and sight! After I got around the second yellow marker I sighted the orange marker and started for that one. As I got closer I had the feeling that no one was near me and sure enough I noticed I was heading to the inside marker not the outside marker. I had made a similar mistake last year. I corrected my path and continued on. After what seemed like forever I got back to the yellows where we started and headed out for loop two. When we got to the shallow spot my Bike Mechanic Avram yelled, "hey chris!". At this point I also noticed a ton of people walking towards us. They were clearly swiming (walking) inside the orange buoys. Cheaters! From here I poured it on to get to the yellow markers. Made it back around both, with the waves crashing everywhere. One guy in the red caps (from my group) was with me at this point. And hardly any other swimmers other than us around. This time I could not see any orange markers. Swam for quite a while without seeing any markers or people. It felt like I was out in the middle of the lake. Finally got some markers and made it back. I was hoping to take a pee before I got out of the lake but instead I hammered it home and was out in 1:25! That was hard. Swim File.

I was able to grab the bike and transition really quickly after application of some suncreen. No issues with the new T4s. I had the wind to my back and was just focused on keeping the watts as low as possible while keeping the pace above 20mph. I focused on downing the first Heed bottle as quickly as possible. I had four gels taped to the bike. I took the first one right away. I knew it was going to be a struggle once we turned into the wind. The bike course basically went out 25 miles came back 12.5 miles, then back out to the turnaround and then home. Into the wind I was struggling to get over 170 watts. For the second section with the wind, I grabbed another gel. The whole time I was working on my Nutrition bottle as well. I picked up several waters on the way back. It was getting hot for sure. I hit the third gel on the dam on the way into transistion. Bike File.

After the dismount I was releaved to be off the bike. I walked my bike back through transition, just focusing on getting it together for the run. I took my time getting my shoes on, hat, sunglasses, and another round of sunscreen. Run felt good. Last year I pushed the first two miles at sub 7. Here settled into an easy pace. For the first loop I hit each aid station, drinking water, red bull, coke, etc. And getting a ton of Ice too!. Second loop the walks started getting longer. I was also starting to cramp. I had started dropping some endurolyte tabs as a result. By the end of the second loop I was hardly able to run at all. I managed two miles of the third loop. There was a bench just past the aid station. I sat down there to take a break. John Studebaker, who was in my AG, came by. He stopped and we talked for a while. Then he told me not to quit, gave me his water and he headed out. I walked back to the aid station and sat down there for a while and tool some more water and calories. Then I headed out. I made it several hundred meters but then my legs cramped up again. I decided that I did not want to walk/limp for four miles and so I callled it quits there. I did walk back one more mile for a total run of 15.5 miles to get back to the finish. Run File.

I got a massage and then grabbed my bike and rode to the car.

One puzzling thing was that Pedro had apparently beat me out of the water. Later Pedro told me that the Yellow Buoys had moved and that the kayaks were directing the swimers around only the first buoy. My swim ended up being about 400 meters longer than the published race distance. That might have been why!

Equipment Notes: The Ghost 8 shoes were perfect. My feet felt great the whole race. No blisters, blue toenails, etc. The Sidi T4s were also excellent. Now I have several hundred miles on them and have no issues. Love these shoes! I got a massive sunburn wearing the USAT kit. USAT should have a long sleeve front zip kit for long course.